The distance between Seattle and Victoria was probably the shortest leg of our journey. Thus, by the time we awoke on Friday morning, we were docked.

Our ship docked in Victoria

Lu and I had been to Victoria before and saw no reason to pay for a shore excursion. We might have walked into town, but from what we could see from the deck, we would be better served taking a taxi. We opted to walk to a small gift shop at the port and return to the ship.

We were among the few who stayed aboard. 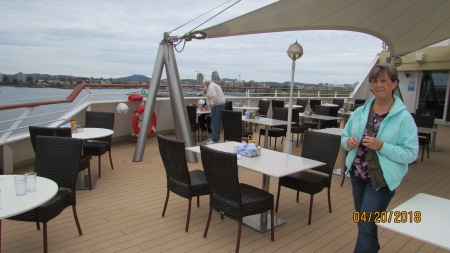 The area shown in the above photo is the aft deck just outside a number of feeding troughs. The main buffet was on the starboard (right) side of the ship. In the middle was a bar and two shorter (with fewer food options) cafeteria lines, and on the port (left) side was a sports bar and grill. If you entered that side and continued past the sports bar, you’d find a gaming arcade and a pizza and sandwich ‘shop’. All the dining areas on this part of the ship were free (in other words, included in the price of the passage.)

One of my favorite photos shows a sea gull preparing to pounce. 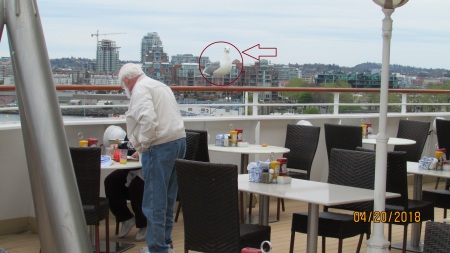 The thief just waiting for his opportunity.

Shortly after I took this picture, the man and his wife left the table momentarily to look at something at the back of the ship. That is when the bird swooped in and stole a few French fries.

Flying objects were the most interesting part of our time spent on the ship at Victoria. 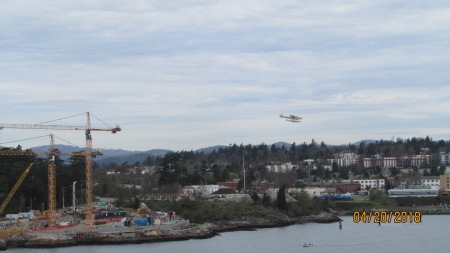 One of the many sea planes we saw.

Looking in the other direction gave us some beautiful scenery.

Speaking of beautiful scenery, this picture is a must see.

My bride of almost 20 years!

My favorite traveling companion still looks great to me!

One more photo of the area at the rear of the ship shows that most travelers were either in other parts of the ship or had gone ashore.

We had this dining area to ourselves!

Originally I had thought our stop in Victoria was to stay within the confines of the Jones Act. (I just spent a fruitless search to get the exact details of the Jones Act. Thus, I’ll simply give you my simple understanding of the law.)

Based on a law passed over 100 years ago, only ships flagged in the United States and having a mostly American crew could sail from one United States port to another. All other ships had to stop at a foreign port somewhere in between. Thus, if you sailed most cruise ships around the Hawaiian Islands, at some point you would have to go to a foreign port and waste two days of your trip. (The only cruise line, as of this writing, that avoids the extra stop is the “Freedom of America” operated by Norwegian Cruise Lines. They flagged the ship in the U.S. to get around the law.)

Since our ship was flagged in Panama or some other place, it could not go directly from Seattle to San Francisco. It had to make a stop in Victoria, British Columbia, Canada.

However, after having watched them load tons of food, water, and other supplies, I think they also stopped to take on the cargo where it was cheaper.

We were docked from before sunrise to late evening and they unloaded one tractor trailer full of supplies after another most of the day.

We left Victoria around dinner time and spent the next day at sea.

While I failed to take any photos on the day at sea, I did manage to begin my walking diet. I decided to walk around the ship’s deck between every meal. By doing that, I would not gain any weight on the cruise!

What I did gain was a big fat blister that ended my diet. The weight I gained will not be discussed any further.

After several great meals and a couple of wonderful stage shows, we awoke to see the Golden Gate Bridge and begin Day 4 in San Francisco.

This entry was posted on Friday, August 31st, 2018 at 5:50 pm and is filed under Travels from the Bucket List. You can follow any responses to this entry through the RSS 2.0 feed. You can leave a response, or trackback from your own site.