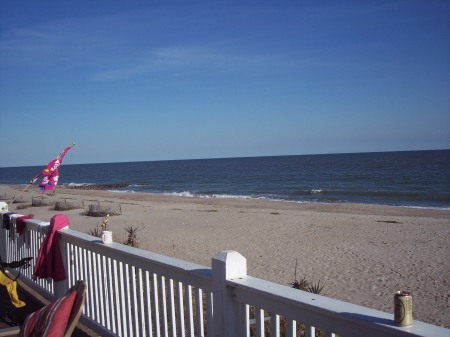 I’ve been going to the beach ever since I was a toddler. Because my father was raised in South Jersey and we had relatives living in Linwood and Somers Point, my family vacationed near the beach every year.

We never stayed at the beach; that would’ve been too expensive. We would rent a small apartment or stay on my uncle’s cabin cruiser (also small) a few miles in from the shore. Most of our time was spent fishing and crabbing in the inland bays and marshes. Once or twice during our stay we’d go into Atlantic City or Ocean City to spend some time on the beach or stroll along the boardwalk. 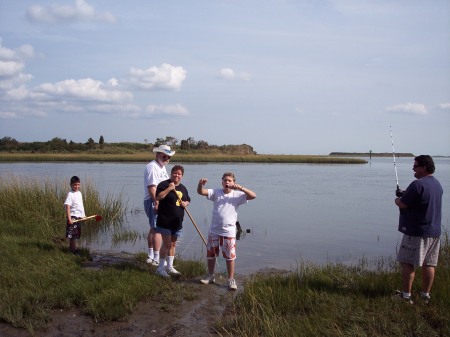 Fishing and crabbing with nephews and nieces

I recall one vacation when my parents did something different. I believe it was 1955 or 1956. Instead of going to South Jersey, we went to Cambridge, Maryland and rented a cottage along the Choptank River. We arrived shortly after a hurricane had passed through. Not only was the river running fast and deep, many of the surrounding fields were still draining. We saw a number of people holding chicken wire at the end of irrigation ditches. They were catching some very large fish that had been driven inland by the storm surge.

On that particular trip, the beach wasn’t quite as convenient. But on one of our days in Maryland, we drove over to Ocean City, Maryland and enjoyed their beach and boardwalk.

I have been to beaches all up and down the East Coast, Mississippi, Texas, California, and Oregon. I’ve also visited Brighton Beach in England and some beaches in Puerto Rico and Mexico. They all speak the same language as they invite us to either walk along the water’s edge or sit down and watch the waves rolling in.

Without even closing my eyes, I can hear the sound of the surf, the wind, and the sea gulls.

I’ve often thought about living closer to a beach. I wouldn’t want to own a home on the beach. Hurricanes might not hit a particular beach that often, but once would be more than enough for me. I’d like to live about twenty miles inland so it would be an easy trip to get close to the ocean.

However, with most of our children and grandchildren living within thirty miles of us, I’d find it difficult to move anywhere.

Perhaps we could win the lottery. Then we could move the entire extended family. 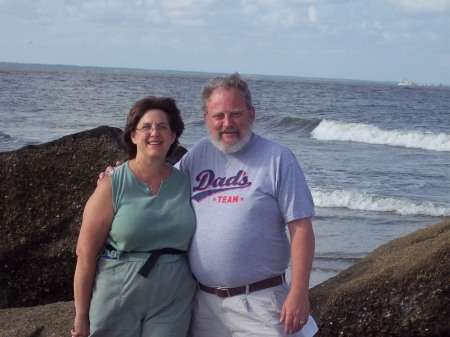 My bride and I on Tybee Island

I have been to the beach so many times in my life that I consider it a God given blessing and wish everyone – especially children – could visit a beach on a regular basis.

Twice we were able to stay at rental properties right on the beach. Once was in Ocean City, New Jersey and the other was on Edisto Island. My bride and I rented the place in New Jersey at the end of the summer season (reduced rates) and my nephews and nieces chipped in. On Edisto Island, we were fortunate to be the guests of John and Debbe Mize. That was in November a couple of years back.

Based on those two experiences, I’d say the best time to go to the beach is after Labor Day and before June. The temperatures are much milder and there are no crowds.

We’re hoping to get to at least one beach in 2010, but I think I’m already there mentally.